It has been published for Villa Vigoni Editore/Verlag the volume “Enrico Mylius 1769-1854. A biography” edited by Giovanni Meda Riquier (Curator of the historical and artistic collections, libraries, archives; Villa Vigoni), Viola Usselmann (Musicologist and Research Fellow; Villa Vigoni) and Christiane Liermann Traniello (General Secretary; Villa Vigoni). The monograph represents the tribute of Villa Vigoni, the German-Italian Centre for European Excellence, on the 250th anniversary of the birth of Enrico Mylius – to him Villa Vigoni owes, through intricate paths of destiny, its existence and its German-Italian mission.

"Trade, business and modernisation of work, science and culture, personal affections and art, Germany and Italy: Enrico Mylius (1769-1854), as a true 'European citizen', was at the centre of a broad network of relationships. In an era of profound transformation, he pursued ideas of sustainable development and progress that were also significant for today's societies. His life and his network are reconstructed here and enriched by private documents so far unpublished.
This monograph is the tribute of Villa Vigoni, the Italian-German Centre for European Excellence, to the 250th anniversary of the birth of Enrico Mylius - its existence and its Italo-German mission are owed to him through the intricate paths of destiny." 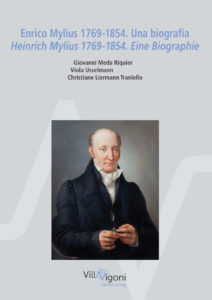