In memory of Fabrizio Saccomanni

Villa Vigoni expresses its condolences for the sad and sudden death of Fabrizio Saccomanni, a great friend and faithful collaborator of the German-Italian Centre for many years. A few weeks ago Villa Vigoni had once again had the pleasure of hosting him for the Vigoni-Euroworkshop, a meeting between Italian and German experts in economics and finance dedicated to dialogue and a fruitful exchange of ideas. Villa Vigoni will remember him as he appears in this photo, always committed in the front line for the promotion of a united Europe open to cooperation between the European people. Former general manager of the Bank of Italy, Saccomanni had been Minister of Economy and Finance in the Letta government. All of Villa Vigoni joins the family in sorrow for the great loss. 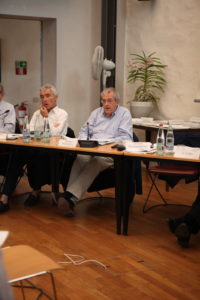